McGowan, Hood & Felder, LLC has filed a lawsuit against Larry S. Davidson and AnMed Health on behalf of a client who suffered permanent injuries while under his care. The lawsuit alleges that Davidson was dealing with a substance abuse problem at the time of our client’s spinal fusion surgery, and as a result, she suffered catastrophic and life-altering injuries. Based on the situation, it is our belief that Davidson was dealing with an alcoholism relapse when he performed this surgery and chose not to inform the patient or postpone the surgery until after he could receive treatment.

Life-altering repercussions because of an act of negligence

Ms. Jean Riggins was experiencing shoulder pain. After meeting with Travis Jeffcoat, a physician’s assistant for Davidson, Ms. Riggins was diagnosed with a herniated disc in her neck, and scheduled for a C4-C5 anterior cervical discectomy and fusion (“ACDF”) at AnMed Heath in Anderson, SC. The procedure would remove the “bad” disc, insert a bone graft between the bones, and then fuse the bones above and below the graft together. See this image from the Mayfield Clinic: 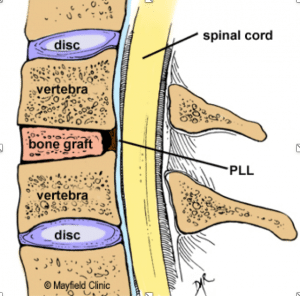 As you can see, this is a delicate surgery, and given the proximity of the spinal cord, it must be undertaken with skill, precision, and finesse.

On August 27, 2017, Ms. Riggins underwent her ACDF procedure, during which “Davidson cut a branch of the carotid artery resulting in around 1400cc of blood loss.” Luckily, the surgical team was able to repair the carotid artery quickly enough to save Ms. Riggins’ life. However, she suffered, and continues to suffer from, multiple negative repercussions, including:

The lawsuit alleges that there is significant circumstantial evidence to point to Davidson dealing with substance abuse problems during the time of Ms. Riggins’ procedure. Davidson was allegedly in “sustained remission” from alcoholism at that time, but as the complaint states:

Furthermore, “Dr. Davidson has been accused of at least four cases of medical malpractice in the August – December 2017 timeframe including the current litigation, each with horrific injuries,”

Were you a victim of medical malpractice while under the care of Larry S. Davidson?

Did you suffer serious and/or permanent injuries while undergoing a surgical procedure performed by Larry S. Davidson in Anderson or Greenville, SC? McGowan, Hood & Felder, LLC, led by litigation attorney Jay Wright, is currently representing multiple plaintiffs in cases against neurosurgeon Larry S. Davidson and AnMed for grossly negligent medical malpractice and negligent supervision. If you or your loved one was harmed, we want to help you.

How long do I have to file a claim?

The statute of limitations for these medical malpractice claims in South Carolina is three years from the date of discovery of the negligence. If you underwent surgery between June 2016 and January 2018, you should contact an attorney immediately, or you could be time barred from pursuing compensation for your injuries.

What if I underwent a different type of surgery?

Our firm represents people who have been seriously and permanently harmed by all manner of surgical errors and medical malpractice. Whether you underwent a spinal fusion, a spinal decompression, a discectomy, a disc replacement, or any kind of spine, spinal cord, or brain surgery, McGowan, Hood & Felder, LLC may be able to help you.

How do I know if I have a case?

McGowan, Hood & Felder, LLC has represented South Carolina victims of surgical and medical malpractice for decades. We have years of experience analyzing medical records and medical histories, reviewing medical scans, and working with medical experts. Because our initial consultations are free, it costs you nothing to contact us to talk about your experiences. We can review your records and experiences and help you determine the best possible path forward.

Are your offices located near me?

Our firm has seven offices throughout South Carolina, including an office in Anderson and an office in Greenville. No matter where you are located, we are ready and able to help. If your injuries left you unable to travel, please let us know. We will come to you.

Did you suffer catastrophic injuries because of an act of medical malpractice? Were you permanently injured while undergoing treatment by neurosurgeon Larry S. Davidson? McGowan, Hood & Felder, LLC is representing multiple clients in claims against Davidson and AnMed Health. Schedule a free consultation by calling 864-252-4406 or reach out to us through our contact page.

McGowan, Hood & Felder started with three attorneys – Chad McGowan, S. Randall Hood and Johnny Felder – who believed that every South Carolina client deserved to be treated with respect, and that every person in need deserved an opportunity to tell their story. Since then, we have grown in size and number, with nearly 20 attorneys whose primary goal is offer you and your family exceptional legal guidance and support when most needed.