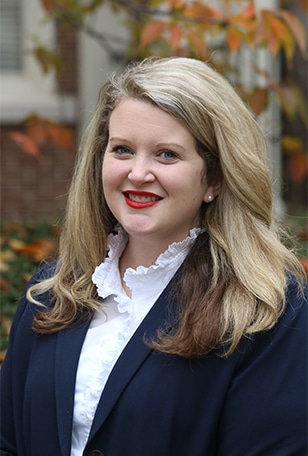 Born and raised in Columbia, South Carolina, Whitney attended Presbyterian College where she majored in history and political science. While at Presbyterian College, Whitney served as junior and senior class president, and received the 2007 American Legion award for service, leadership, and scholarship. Whitney then returned to Columbia to attend the University of South Carolina School of Law, where she served as vice president of the Student Bar Association. During the course of her tenure she was featured in Student Lawyer, a national publication of the American Bar Association, for her efforts in organizing service projects and outreach for incoming law students and law school faculty. In recognition of her commitment to service, Whitney received the Susan V. “Gina” Johnston Award, which honors a deserving student’s commitment to service and leadership, as well as the Student Bar Association Service Award.

Whitney served as an adjunct professor at Presbyterian College in 2014, teaching constitutional law with a focus on the structures and powers established by the Constitution. In addition to her legal passions, Whitney serves as secretary of the Columbia Classical Ballet Board and enjoys spending time with friends and family, going to the beach, and baking. Whitney’s favorite item to bake is a lemon pound cake, which earned her a blue ribbon at the South Carolina State Fair in 2013.