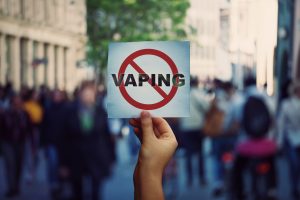 Vaping was supposed to be the “next big thing” to help people quit smoking. Instead, vaping has spawned an entirely new, deadly illness all of its own.

The new illness, now officially named EVALI, short for e-cigarette or vaping product use-associated lung injury, is causing states to place temporary bans on vaping and product sales as a way to keep people from continuing to die. With so many cases of EVALI being reported, it’s been difficult for health officials, much less the media, to keep up with the numbers – but as of October 22, the Centers for Disease Control & Prevention (CDC) has confirmed 34 deaths and more than 1,600 cases of EVALI.

South Carolina is now looking to become proactive in protecting its citizens and visitors as “the South Carolina Department of Health and Environmental Control (DHEC) reports 30 “confirmed or probable” cases of vaping-related lung disease” that they know of in the state so far.

State lawmakers have been discussing whether to ban vaping products since mid-September but State Rep. Wendell Gilliard plans to introduce a bill in January that will essentially criminalize any method of possession, transport, or sale of vaping products in South Carolina. The bill would include internet sales that result in delivery of vaping products to an address in South Carolina. Should the bill pass and become law, violators will be charged with a misdemeanor carrying a fine of $200 to $400 and/or spending up to 30 days in jail based on the offense.

How to safely recycle your vaping devices

If you have suffered serious injury and hospitalization from using a vaping device, including exploding battery injuries, make sure you preserve the device in a container (like a freezer bag or plastic container), along with any receipts showing the purchase. Your McGowan, Hood, Felder & Phillips attorney will want to take possession of the device to prove that you did use it and suffered damage.

While there currently is no ban in effect in South Carolina, the fact is that the CDC and DHEC have issued warnings that vaping is unsafe. Due to the health crisis and likely impending legislation being passed in 2020, the Drug Enforcement Agency (DEA) is now accepting vaping devices and related products at their National Prescription Drug Take-Back Day, and the event is completely anonymous. The only request is that cartridges and lithium ion batteries be removed prior to turning in the devices, due to environmental issues and the potential for explosion.

If you want to get rid of your vaping devices, and you have missed the DEA’s take-back event, you do have other options to dispose of your vaping devices. You want to check large electronic chain stores such as Best Buy or local hazardous waste disposal locations that accept electronics. These devices cannot be placed into your ordinary trash any more than a television or computer could be as they require specific recycling methods.

With a little over two months to go before the South Carolina vaping ban bill is even introduced, there is no telling how many more people will fall ill or die from the use of these devastatingly dangerous vaping products by the time any law goes into effect, if one does at all. While vaping was supposed to be a “healthier” alternative to smoking, it has proven to be much more perilous due to the aggressive pace with which it has shattered lives of users and their families. Citizens need to begin taking steps to protect themselves by seeking legal help.

If you or a beloved family member or friend has become ill or died after the use of JUUL or other vaping products caused EVALI, the caring and committed products liability attorneys at McGowan, Hood, Felder & Phillips, LLC are here to listen and guide you through your legal options to recover the compensation you deserve. We will help you hold the manufacturers accountable for placing lethal products into the hands of innocent citizens.

To schedule a consultation with a member of our legal team who zealously advocates for the rights of citizens in South Carolina and nationwide, put your device in a secure place as mentioned above – and then call our dedicated e-cigarette hotline at 864-651-9295. You can also reach us through our contact page.