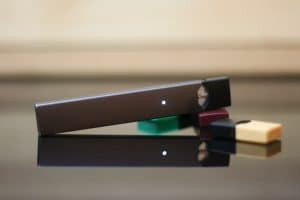 It is now painfully clear that vaping is not the safe alternative to smoking. More individual cities and entire states are implementing temporary bans by the day, and even the federal government is looking to restrict the sale and use of flavored e-cigs.

At the center of this controversy sits JUUL: a popular vaping device that skews to a much younger crowd. JUUL is unique among vape pen manufacturers: its pods and devices are self-contained, and they don’t contain the same types of chemicals that other products do.

But is it safer than those other products? Is it better than electronic nicotine delivery devices (ENDS) that can be modified to a consumer’s will?

No, it is not. JUUL is dangerous in its own way.

JUUL pods contain nicotine in two different strengths: 3% or 5%. Most pods contain the same amount of nicotine as a pack of cigarettes. Unlike other vaping products, JUUL uses something called nicotine salts, the same type of product that traditional cigarettes use. They’re smoother to inhale than the “freebase” nicotine used in most vape pens and e-cigs, because they have a lower pH level. That translates to less physical pain in the throat and the “buzz” that smokers expect when they light up. It also requires additives (namely, benzoic acid) in order to allow the salts to vaporize and then be absorbed.

This matters because JUUL’s key demographic skews younger, and younger people – especially non-smokers who have picked up JUULing for aesthetic reasons – can easily develop nicotine poisoning (toxicity) from overuse. Nicotine toxicity can lead to rapid breathing and increased heart rate, elevated blood pressure (along with nausea, headaches, and dizziness), seizures, respiratory failure, coma, and even death.

According one of the pages on JUUL’s website, its pods contain:

Benzoic acid is what’s known as a volatile organic compound (VOC) and has some serious side effects. This VOC is not intended to be inhaled, yet it is the primary ingredient for making nicotine salts easier to inhale. Some of the dangers of this chemical include:

Furthermore, benzene is a derivative of benzoic acid, and is a VOC known to cause:

Flavorants are a risk all on their own

A study published by researchers at Harvard T.H. Chan School of Public Health reviewed 51 different types of flavored e-cigarettes, and found diacetyl in 39 of those products. Diacetyl can cause “popcorn lung,” (bronchiolitis obliterans) a serious respiratory disease. The study listed the tested flavors, though not the specific products.

Most of the specific chemicals found in JUUL flavorants have remained a secret; however, the chemicals that have been discovered are highly dangerous. While benzene can come from benzoic acid, it can also be formed from aldehyde chemicals – as in formaldehyde – used in flavorants such as vanillin. Formaldehyde is another VOC and it causes cancer with long term exposure.

Additionally, a study conducted by Yale found acetals in 4 flavors of JUUL pods. Acetals cause airway irritation, and with long-term use can cause lung damage. Acetals are commonly used as food flavorants but are eaten in trace quantities. No one predicted the use of these same chemicals – which food factory workers are required to limit exposure to – would be directly inhaled into the lungs in concentrated formulas on a steady basis. And none of these chemicals are listed on the packaging.

One of the most serious issues with vape juice in general is that even if you know which chemicals are added, you don’t always know what those chemicals will create once mixed and sitting on a shelf waiting to be sold. Because the chemicals used to create different flavorings are largely unknown and vary by batch, there is no way of knowing what unintended chemical compounds are going to be inhaled.

The products liability attorneys at McGowan, Hood & Felder, LLC fight for injury victims in South Carolina and throughout the nation. We want to help you hold JUUL and other e-cigarette manufacturers accountable for their actions. To speak with one of our JUUL litigation attorneys, call our dedicated e-cigarette hotline at 864-651-9295 or reach out to us through our contact page.