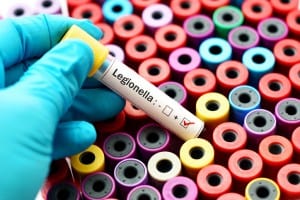 We generally think of Legionnaires’ disease as affecting hotel visitors who have been exposed through the air conditioning system, but the Legionella bacteria can be transmitted through any misted fluid, including pool water, steam rooms, and hot tubs. At Graceland in Memphis in May and June of 2017, visitors flocked to the water attractions to beat the summer heat that topped out at over 90 degrees Fahrenheit.  In the cool waters, they encountered dangerous bacteria that infected at least three people. This is not an isolated occurrence either; since its discovery in 1972, there have been over a quarter of a million cases of Legionnaires’ disease. The rate of incidence has skyrocketed in the past 15 years, up 450%.

The Graceland outbreak was not the first of 2017. Two separate patrons of the popular Las Vegas Rio Hotel also contracted Legionnaires’, apparently through the hot water system in the resort. A NYC police officer has also been positively diagnosed with Legionnaires’ after the water system in the 23rd Precinct Station House tested positive for Legionella. Because the Legionella bacteria grows and multiplies between 68 and 122 degrees Fahrenheit, hot water systems are particularly at risk for contamination. Remediation for Legionella involves regular cleaning with chemicals, such as chlorine, using temperatures above 140 degrees Fahrenheit, and minimizing standing water and misting situations.

Despite its short medical history, Legionnaires’ has likely been present for most of human history, causing unidentified pneumonia outbreaks. Legionella can lead to more than simply Legionnaires’ disease, though; it can also cause Pontiac Fever in approximately 90% of those exposed.  However, Pontiac Fever has symptoms more like a low-grade flu and has never led to a fatality. The true risks lie in the exposure of the elderly, the very young, smokers, or the immunocompromised to Legionnaires, as it can have serious and sometimes fatal repercussions. All travelers should be aware of the warning signs and symptoms: high fever (over 102 degrees Fahrenheit), body and headache, cough, chest pains, and lack of energy. Treatment involves antibiotics and supportive care, but fatality rates have been reported over 30% in various outbreaks.

Summer holidays should be spent relaxing, spending time with family members, and exploring new places. Vacation is not the time to be exposed to dangerous bacteria or develop serious diseases. Resorts, hotels, hospitals, and all places of public accommodation have the responsibility for maintaining their water systems to the highest standard, to avoid spreading potentially fatal illnesses.

At McGowan, Hood & Felder, LLC, our South Carolina attorneys have the experience to secure rightful compensation for those who have been harmed by others negligence or misconduct.  If you have been injured or became ill after exposure to Legionnaires’, call 803-327-7800 or fill out our contact form.