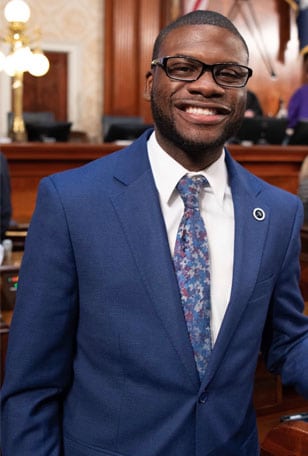 Kambrell Garvin was born and raised in Columbia by a single-mom who instilled the importance of education, hard work, grit and determination. At the age of 5, he was diagnosed with a speech impediment. It was then, that his mom changed the trajectory of her career and pursued a career as a speech therapist to assist him in overcoming that challenge. As a result of her willingness to go above and beyond to assist him, today, Kambrell is able to speak clearly and confidently; turning what once was a weakness into strength and in the process, discovering the power of his voice.

At an early age, Kambrell used his voice to serve as an advocate to move his community forward. As a young community leader, Kambrell: organized his first voter registration campaign at the age of 10, led efforts that registered hundreds of new voters, and led various political and civic initiatives throughout the country. At Winthrop University, Kambrell served two terms as the Student Government President, ex-official member of the Board of Trustees, and voting member of the 10th Presidential Search and Selection Committee.

A longtime equitable education advocate, Kambrell joined Teach for America, a non-profit organization dedicated to building the movement to eliminate educational inequity. He spent three years as a South Carolina public school teacher in Walterboro, SC, a rural community located along the I-95 corridor. While teaching, Kambrell spearheaded the first ever 6th grade overnight field trip, science fair and was actively engaged in the school and local community. As an educator, he used his voice and instilled into his students that they could achieve anything that they put their minds to and that their zip code would not limit their future success.

Each of these experiences equipped Kambrell with a unique perspective and furthered his passion to bring positive change to his community and state. After returning to his hometown, Kambrell realized that his community deserved a strong voice championing issues of importance. Inspired by the example of his grandfather, who fearlessly served as the first African American on his local city council, Kambrell launched a grassroots campaign for the SC House of Representatives District 77. In June 2018, at age 26, Kambrell won the Democratic Primary with nearly seventy-percent and the subsequent general election with eighty-five percent of the vote – while still in law school.