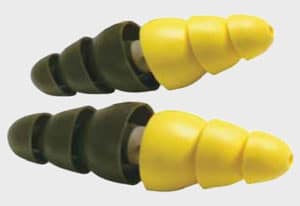 3M Dual-Ended Combat Arms™ earplugs were supposed to protect the hearing of our servicepeople. Instead, thousands of active duty and veteran soldiers sustained hearing loss because of their faulty design – a faulty design that 3M kept from the government and from our soldiers. McGowan, Hood & Felder, LLC is currently accepting cases on behalf of servicepeople who have experienced hearing loss or tinnitus. Call us today at 803-327-7800 to learn if we can help.

What you need to know about 3M’s defective earplugs

In 2003, a company called Aearo Technologies (acquired by 3M in 2008) won a contract with the U.S. government to be the primary supplier of “selective attenuation earplugs” designed for military service. These earplugs differed from other types of earplugs in that they did not block out all noise; instead, they allowed the user to block out varying levels of sound, based on what the soldier needed.

The yellow side allowed a soldier to hear low levels of noise, like voice commands; the green side was supposed to block out high- and low-level sounds. The benefit of these earplugs is that servicepeople would be protected from the sound of gunfire or explosions, but could also hear commands coming from their officers.

The problem is that the earplugs had a design flaw: the stems are too short. Over time, the plugs would loosen in the ear, making it less safe to use them.

Covering up the defect

As it turns out, Aearo/3M knew about the defect as early as 2000 – and yet never disclosed the defect to the U.S. government, or to anyone who purchased their products. Rather than recall the earplugs, they simply folded small pieces of them back, hoping that would be enough to secure the seal.

Blowing the whistle on 3M

Moldex-Metric is a company that produces hearing protection equipment. Looking to replicate 3M’s success, the company tried to recreate the earplugs, but they kept getting different results in their tests. When the company realized the flaw in the design, they filed a whistleblower lawsuit under the False Claims Act. In July 2018, 3M “agreed to pay $9.1 million to resolve allegations that it knowingly sold the dual-ended Combat Arms Earplugs, Version 2 (CAEv2) to the United States military without disclosing defects that hampered the effectiveness of the hearing protection device,” per the Department of Justice.

If you served in the military between 2003 and 2015, were given (or purchased) 3M Dual-Ended Combat Arms™ earplugs, used those earplugs during your service, and sustained hearing loss, you could be entitled to compensation for your injuries. You may be eligible if you have developed:

If you served as a civilian contractor, or worked for Border Patrol, between 2003 and 2015, you may also be entitled to compensation.

If you served overseas during any of the following operations, you may have been issued defective 3M earplugs:

Affected parties may have also lent support in Libya, Somalia, Syria and Yemen. You may also have sustained hearing loss due to defective earplugs even if you did not serve overseas.

Making a claim for compensation

If you sustained hearing loss because of defective 3M earplugs, you can file a lawsuit for compensation. Making a claim should not affect your disability payments, but please schedule a consultation with us first to talk about your needs and what is best for you.

Please understand that there are potentially thousands of men and women who will be filing claims related to 3M’s defective earplugs, and multi-district litigation (MDL) is ongoing. You could be entitled to compensation for your:

McGowan, Hood & Felder, LLC works on contingency and offers free consultations, so it will cost you nothing to meet with us and talk about your claim. If you served in the U.S. military or in Border Patrol between 2003 and 2015, and you have suffered with hearing loss, tinnitus, or other hearing-related conditions, we want to help. Please call 803-327-7800 or complete our contact form to schedule your consultation at one of our offices located throughout South Carolina.