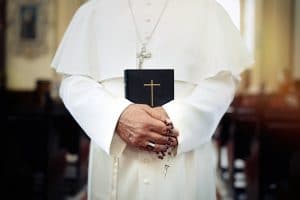 Many people and families put their faith and trust in the church and other religious institutions. Sadly, and more often than we realize, those institutions let them down in the most devastating ways. When religious leaders take advantage of their authority and use that power to commit sexual abuse within the church, they must be held accountable.

Historically, however, religious institutions have closed ranks and protected those accused of sexually abusing children and adults in their congregation or parish. Priests, bishops, and pastors are moved around to different churches rather than punished or removed from their positions of power. Investigations are cloaked in secrecy and victims find themselves outcast or shunned from their communities.

Sexual abuse can happen in any religious faith, including:

Recently, several churches are facing the effects of the #MeToo movement, along with brave survivors of sexual abuse who are standing up for their rights and speaking out. But will the churches’ actions be enough – or are they simply trying to cover their tracks?

The New York times reports The Vatican announced on June 1 that Pope Francis made changes to the Code of Canon Law, the first revisions since 1983. These changes to the Church’s penal code will explicitly acknowledge that adults (and not just children) can be sexually “victimized by priests and powerful laypeople who abuse their offices.”

The new law goes into effect December 8, 2021, and many sexual abuse survivors approve of the move. The Survivors Network of those Abused by Priests told the NYT, “This is an important step forward in acknowledging the true scope of abuse within the Catholic Church.” However, they also added a warning: “The changes announced by the Vatican are only as good as their enforcement.”

Although previous church law considered sexual relations between clerics and parishioners “sinful,” they were never considered a crime. This law changes that, acknowledging the dynamics of the power relationship between a religious superior and their “flock.”

The revisions to the Code of Canon also acknowledge and criminalize the process of grooming, which is building a relationship with a young person in order to sexually exploit and abuse them.

NPR reports that in a separate letter, “Pope Francis reminded bishops that one of the aims of the revisions was ‘to reduce the number of cases in which the imposition of a penalty was left to the discretion of authorities,’” an implication that the Church intends to continue handling sex abuse within its walls rather than bringing in independent investigators.

Meanwhile, as the Southern Baptist Convention (SBC) went into full swing in June, a letter from outgoing SBC Ethics Chief Russell Moore left leaders and congregants reeling. A letter written by Moore and published May 21 on the Baptist Blogger site claimed that Baptist church leaders had sought to “exonerate churches with credible allegations of negligence and mistreatment of sexual abuse survivors.”

Moore also spoke of the resistance and anger he caused when he invited Rachael Denhollander to speak at the convention. Denhollander is a lawyer, former gymnast, and the first person to publicly accuse Larry Nassar of sexual assault. During her speech, Denhollander detailed the sexual abuse and mistreatment of a congregant at the hands of a prominent Baptist, drawing the further ire of Baptist leaders.

“As I knew then and know far better now, if anything, Rachael downplayed the horror this survivor had experienced, and later would experience, at the hands of the Executive Committee,” wrote Moore in his letter.

Outgoing leader of the Southern Baptist Convention J.D. Greear recently gave his last sermon as president, urging members to stop acting like the dangerous religious leaders of Jesus’s day. He told NPR, “I can assure you it happens when we care more about our reputation than the victim’s safety or when we defer to protection of the institution rather than the protection of the vulnerable for whom Jesus died.”

If you were sexually abused in the church

As you can see, calls for accountability in religious organizations are growing louder. We hear you. Coming forward to seek justice for the abuse you or your loved one endured can help hold both the offender and the institution as a whole responsible – preventing others from becoming victims.

If you are unsure about the statute of limitations for your case, talk to an experienced South Carolina sexual assault attorney.

The attorneys at McGowan, Hood & Felder, LLC fight for survivors of sex abuse. We provide compassionate and strong legal representation, and work to ensure that both your abuser and the institution that protected them are held accountable. We can help. To schedule a free consultation with one of our South Carolina attorneys, call 803-327-7800, or we invite you to reach out to us through our contact page.