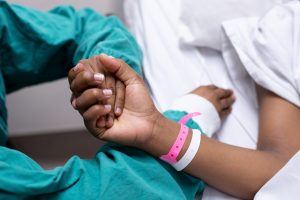 “This is how black people get killed.” This is just one of the statements Dr. Susan Moore posted from her hospital bed in early December after testing positive for the coronavirus. About two weeks later, Dr. Moore died from complications due to COVID-19.

In a video posted to Facebook, she accused staff at Indiana University Health North Hospital (IU North) of ignoring her requests for medication and complaints of pain – maintaining the mistreatment was due to the fact that, even though she herself was a doctor, she was also Black. Moore alleged medical neglect and mistreatment on the part of her doctor, and believed it was due to her race.

When Moore requested painkillers and remdesivir (a common treatment for COVID-19), she said her doctor refused, saying he didn’t feel comfortable and that she “should just go home right now.” In the video, she said, “I was in so much pain from my neck. My neck hurt so bad. I was crushed,” she said. She added that the doctor “made me feel like I was a drug addict, and he knew I was a physician.”

“This is how Black people get killed,” she continued. “When you send them home and they don’t know how to fight for themselves.”

After securing a patient advocate, Moore was eventually offered the pain medication she needed, but only after further testing showed that condition was worsening. She was eventually discharged, but fell ill 12 hours later and checked into a different hospital, where she received what she described as “very compassionate care.”

Of IU North Hospital, Moore said, “Those people were trying to kill me. Clearly everyone has to agree they discharge[d] me way too soon.”

A spokesperson for IU North said, “As an organization committed to equity and reducing racial disparities in healthcare, we take accusations of discrimination very seriously and investigate every allegation.” Dennis M. Murphy, President and CEO of Indiana University Health, also admitted “that we may not have shown the level of compassion and respect we strive for in understanding what matters most to patients.” [CNN]

COVID-19 has disproportionately affected the Black community – in fact, studies show that Black people are twice as likely as white people to contract the virus. Socio-economic and racial disparities in healthcare lead to negative outcomes for people of color, and Dr. Susan Moore’s emotional Facebook video and posts are hard proof.

Research also shows that the medical community tends to treat Black people differently when assessing pain. Misleading and emphatically false beliefs about Black patients, including that they experience pain differently than white people, leads to inappropriate or improper treatment.

Systemic racism in the healthcare community is a long-standing problem with “baked-in” myths and misinformation that can cause great harm to people of color. If you or a loved one are admitted to the hospital during this chaotic time, the best thing you can do to protect yourself is to secure a patient advocate who will look out for your best interests.

If racial bias led to medical neglect or malpractice, the attorneys at McGowan, Hood & Felder, LLC can help. We will get to the bottom of what led to your injuries and who was responsible, and then fight for compensation on your behalf. To schedule a free consultation with one of our South Carolina attorneys, call 803-327-7800, or we invite you to reach out to us through our contact page.