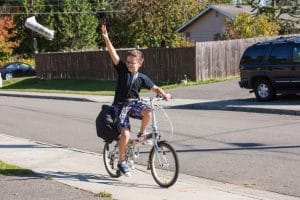 Two former paperboys for a Gannett-owned newspaper in Rochester, NY have filed lawsuits alleging the paper and its parent company failed to protect them against a sexual predator on staff. This brings the total number of complaints against the publication (so far) to seven.

The lawsuits, filed in September by two Rochester-area men, claim that their supervisor, Jack Lazeroff, repeatedly molested them in the early 1980s when they were delivery boys for the Rochester Democrat and Chronicle. Five other men have previously filed suit. Although these incidents occurred in the 1980s, under the Child Victims Act, victims of childhood abuse may pursue civil claims that would have otherwise expired under statutes of limitations.

Background of the case

Jack Lazeroff, who died in 2003, was arrested at least twice in the 1980s for sexual abuse of young boys. The claims against Gannett and its subsidiary, the Rochester Democrat and Chronicle (D&C), include allegations of negligent hiring and supervision regarding Lazeroff, who worked for the D&C in the 1980s. His job as a circulation manager put him in daily contact with young boys and girls who delivered the papers.

Among other things, the legal filings allege that Lazeroff was fired from a previous job at a bank after co-workers witnessed him fondling teenage boys in his office, yet he was still hired at the paper. One of the claims also alleges that Lazeroff would fondle, grope and sexually abuse the plaintiffs. He also allegedly “offered the plaintiff extra money each week if he found ‘other boys like [him].’” Lazeroff was eventually fired from the D&C in 1988 and charged with second-degree assault.

Another passage from a plaintiff’s complaint (known as “F”) is particularly chilling, reading:

The seven claims against Gannett and the D&C state that management should have known that Lazeroff was using his position at the D&C to groom and sexually assault young children. All seven of the plaintiffs were between the ages of 11 and 15 at the time of the sexual abuse.

Even though Lazeroff died 17 years ago, these suits may go forward as they are not against Lazeroff, but against the newspapers that employed him. The plaintiffs claim that Lazeroff’s misconduct was widely known throughout the company but that D&C and Gannett failed to take any steps to protect the children from his abuse. And, as a result of this failure, the plaintiffs – children – endured multiple episodes of sexual abuse and assault.

The goal of these civil actions is to hold companies and supervisors responsible for the behavior that occurs under their watch. It means putting a stop to negligent hiring practices and companies turning the other way when they knew or should have known of the sexual abuse of a child.

If you or a loved one has suffered sexual abuse at the hands of an authority figure or supervisor, you need to explore your options now.  There are time limits on cases, but we are aware of ways to attempt to avoid this limitation. The attorneys at McGowan, Hood & Felder, LLC are here to help you.

To schedule your free consultation with one of our South Carolina injury attorneys, call 803-327-7800, or we invite you to reach out to us through our contact page.