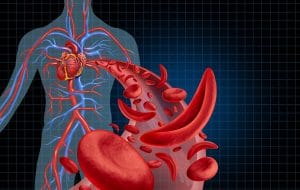 An extremely painful condition, sickle cell disease primarily affects blacks, although Hispanics, South Asians, Caucasians (from southern Europe), and people from Middle Eastern countries can also carry the trait and suffer from the condition. For most people with sickle cell, there is no cure.

Often, doctors compare sickle cell disease with cystic fibrosis (CF), as it is also an inherited disorder. Cystic fibrosis affects the cells that produce sweat, mucus, and digestive juices in the body. Instead of these fluids being thin and slippery, the gene that causes CF makes them thick and sticky. These secretions can clog up the lungs and pancreas, as well as other passageways in the body. There is also no cure for CF.

Both of these conditions cause patients severe pain, loss of quality of life, and frequent hospitalizations. The National Institutes of Health (NIH) provides funding for research, clinical trials, and FDA drug approvals for sickle cell disease and cystic fibrosis. However, a 2020 study published in JAMA Network Open showed that NIH funding and research expenditures, as well articles and drug approvals, are significantly greater for CF than for sickle cell disease.

Is this another example of systemic racism in healthcare? Reginald French, President and CEO of The Sickle Cell Foundation of Tennessee, pointed out to WebMD, “I don’t know if that’s the sole reason [there’s been such a difference in research funding], but I do believe that’s a top contributing factor.”

However, the number of clinical trials for CF and SCD were similar at 27.3 versus 23.8, respectively.

African-Americans are a historically socio-economically challenged group who have also suffered at the hands of the medical system for hundreds of years. Legislators and medical professionals must take the reins and decrease the gap in funding and research for sickle cell disease in order to increase healthcare equity for people of color.

At McGowan, Hood & Felder, our South Carolina injury attorneys want to help patients harmed due to discrimination or racism in the healthcare system. If you believe you experienced preventable injury, get in touch with our office today to find out how we can advocate for your rights. Schedule your free consultation today by calling 803-327-7800, or we invite you to reach out to us through our contact page.