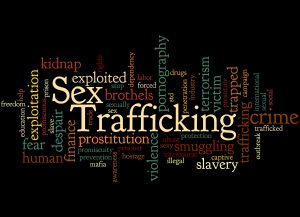 Sex trafficking has two components: human trafficking and sexual slavery. These are reprehensible crimes. The crimes begin when sex traffickers groom or recruit a young woman or person to engage in forced or coerced sex acts.

Businesses like hotels, truck stops or massage parlors have long been complicit in these types of crimes. They benefit financially from the business provided by the sex trafficker or the victim of abuse. They turn a blind eye and the only motive is money. These are large companies who are on the Fortune 500. You see them every day when in a car. You see their brands in every city. Their complicit behavior in allowing this type of thing to occur on their premises makes them as guilty as the traffickers. They are both motivated by money. Everyone should be held accountable when women and children are harmed by sex and human trafficking.

Trafficking isn’t just a global or federal problem – it’s a state and local epidemic as well. Between January 2018 and December 2018, South Carolina identified:

Out of these 156 cases, 107 were sex trafficking. They also noted that in this one-year period, 345 phone calls to the National Hotline came in from South Carolina.

That is the tip of the iceberg. According to research compiled by Human Trafficking Search, “Every year an estimated 1.6 to two million children and youth run away from home and of those runaways at least 800,000 will be lured into commercial sexual exploitation. The majority of runaways return to their homes or foster care placements in a few weeks but on average 1 in 3 runaways will be lured into commercial sexual exploitation within 48 hours of being on the streets.”

They were vulnerable children preyed upon by traffickers. They fell between the cracks. For every person calling the hotline, there may be 20 who do not call. There are likely thousands of victims in South Carolina at this moment. This is not the kid from the wrong side of the tracks. This is your neighbor, schoolmate and bandmate. It happens in every town and city in South Carolina and the United States.

According to the National Human Trafficking Hotline, the top venues for sex trafficking in South Carolina in 2018 included:

Most victims are unable or unwilling to get help or report their abusers, so this is likely incomplete and underreported data. However, collecting this information can help authorities, victims and loved ones help find the resources they need and put traffickers out of business.

Human and sex trafficking tends to occur more often in areas that have access to major highways and transportation hubs. Vianca Anderson of the Cumbee Center, an emergency shelter for victims of sex trafficking, says, “It’s definitely an issue here because we’re so close to Columbia and Charlotte. There are some human trafficking hotspots here because of the proximity to I-20 and the 1-95 interchange. Human trafficking is everywhere.”

South Carolina passed anti-trafficking legislation in 2012, with some of the most comprehensive laws in the country. Sex and human trafficking laws encompass issues and crimes including:

Civil actions are an important way for victims to find justice against their abusers and the other people liable for the crimes perpetrated against them.

Additionally, South Carolina’s human trafficking laws allow victims to apply for expungement for any crimes like prostitution which is associated with trafficking. Our attorneys can give you more information.

You may contact the National Human Trafficking Hotline at 888-373-7888 or text “help” to 233733 if you are a victim or suspect sex trafficking is happening in your community.

If you or a loved one are a victim of sex trafficking, there is help for you. The attorneys at McGowan, Hood & Felder, LLC can provide legal guidance and fight for justice, standing by your side throughout the entire process. We have female attorneys on staff to provide assistance if you only wish to speak with a female attorney. Our goal is to support you in a caring environment. We will support you. Call us at 803-327-7800 or reach out to us through our contact page. We serve clients throughout South Carolina.