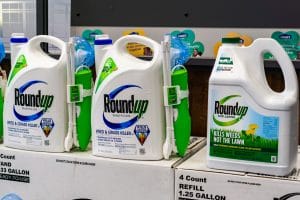 The agricultural product Roundup is the most commonly used product in the world for eliminating unwanted plants and weeds. Roundup’s manufacturer is Monsanto, the agrochemical giant responsible for manufacturing products like DDT, Agent Orange, and bovine growth hormone (BGH). Over the last few years, thousands of lawsuits have been filed against Monsanto, alleging that its flagship product, Roundup, is dangerous.

To date, Monsanto has lost every lawsuit that has gone to trial, and has been ordered to pay billions of dollars in damages to plaintiffs who, after decades of using Roundup, developed cancers and other illnesses.

Monsanto has cornered the market on herbicides

In 1970, Monsanto developed and manufactured a glyphosate-based herbicide, and marketed this chemical as Roundup Weed Killer. By 2007, Roundup was the most commonly used herbicide in the U.S. Approximately 1.4 billion pounds Roundup are used annually in over 160 countries throughout the world.

Roundup’s effectiveness is not the only reason that it is the most widely used product. Monsanto also manufactures seeds that are genetically modified to resist Roundup. “Roundup Ready” crops, as they are called, allegedly allow consumers to use glyphosate-based products in their fields without worrying about harming their crops. According to research published in the Environmental Sciences Europe journal:

Thousands of individuals diagnosed with multiple myeloma, non-Hodgkin’s lymphoma, leukemia, b-cell lymphoma, and other types of cancer have filed lawsuits against Monsanto. The allegations claim Monsanto has known of the health hazards of glyphosate for many years, but failed to warn the public about the potential risks.

In the most recent Roundup case, a jury in Alameda County, California ordered Monsanto to pay out over $2 billion in damages to a couple who used Roundup on their properties for decades. In 2014, the husband was diagnosed with non-Hodgkin’s lymphoma in his pelvis and bones; in 2015, the wife was diagnosed with the same cancer in her brain. The jury found for the couple, and awarded $1 billion to each plaintiff in punitive damages, and $55 million in collective compensatory damages.

The latest lawsuit was set to begin on August 19th in St. Louis, Missouri, but has been postponed until January 2020. The plaintiff, Sharlean Gordon, is one of 75 plaintiffs who filed lawsuits in 2017. She developed non-Hodgkin’s lymphoma, which she alleges was the result of using Roundup for so many years. She has also “suffered multiple rounds of unsuccessful cancer treatment for diffuse large B-cell lymphoma and follicular lymphoma, as the cancer has spread through her body over many years. She recently suffered a setback with a diagnosis of myelodysplastic syndrome (MDS).”

At McGowan, Hood & Felder, LLC, our South Carolina product liability attorneys are committed to holding companies to account when their products cause injuries to our clients. If you have developed cancer or any illness as a result of exposure to Monsanto’s Roundup, or from any dangerous product, we want to help you seek justice. To schedule a free consultation about your case, give us a call today at 803-327-7800 or complete our contact form.