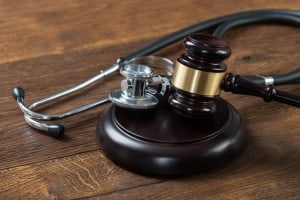 Partner Johnny Felder and attorney Steve Welch recently obtained a $1.1 million medical malpractice verdict on behalf of Peggy Goldman (as an individual and as the personal representative of the late Rozella Goldman). Justice was finally served after six grueling years, but ultimately, the negligence parties were held accountable for their actions. It is a bittersweet win.

What happened to Rozella Goldman?

On March 12, 2011, Rozella Goldman went to the E.R. of Self Regional Medical Center. She was congested and coughing, and she could not catch her breath. She was transferred to the care of Dr. Mark Robirds, of Greenwood Internal Medicine, LLC – a doctor who had treated her for a different illness before this occasion. Rozella expected to be at Self for three or four days, while she was treated for bronchitis with IV drugs.

While she was at Self, Dr. Robirds – who had admitting privileges there – thought her INR levels (the “international normalized ratio,” or how long it takes the blood to clot) were low, and increased her dosage of Coumadin. He also prescribed another blood-thinner, Lovenox. On March 14, despite Rozella’s INR levels being in a therapeutic range, Dr. Robirds ordered a 5mg dose of Coumadin – two time the amount the Self Hospital Pharmacy Policy Manual for Coumadin administration recommends. The next day, despite Rozella’s elevated levels, Dr. Robirds prescribed Ultram (tramadol) for her pain.

Ultram comes with the following warning insert: “Use With Digoxin and Warfarin (Coumadin), Post-marketing surveillance has revealed rare reports of digoxin toxicity and alteration of warfarin effect, including elevation of prothrombin times.”

In short, tramadol can lead to higher INR levels. When your INR levels are too high, your blood cannot clot at correctly or at all. This is what happened to Rozella, who suffered a marked edema in her legs (an abnormal accumulation of fluid under the skin, characterized by pressure leaving an indentation in the skin itself) as well as a massive hematoma (a massive blood clot) behind her right knee. It appears that Rozella lost almost 5 pints of blood internally as a result of these events. The skin on her right leg broke down, leading to a wound so severe, it needed wound care nurses.

Yet, Self Regional let Rozella go home with this hematoma in her leg. She ended up at the Abbeville Area Medical Center a little over a week after her discharge from Self, where doctors discovered she had not one, but two hematomas in her leg. This led to an open wound on her leg almost 10 inches in length. Rozella underwent debridement surgery, and was told she could lose the leg above the knee, and had to seek treatment with a home health wound care specialist and a wound vac.

The case against Self and Dr. Robirds

Despite the adverse effects Rozella experienced, as well as the clear warning that combining tramadol and Coumadin could have potentially serious side effects, neither Dr. Robirds nor Dr. Tran (head of Self Hospital Pharmacy) said at trial that they would stop the practice of administering the drugs together, nor did they feel it necessary to warn future patients that such an event might occur.

Rozella Goldman died in 2014. While she did not die of her injuries, she dealt with the pain and the suffering for 5-6 months before she healed. She spent 60 years of her life teaching Sunday School at South Main Street Baptist Church in Greenwood, SC. She ran the church’s social hall and kitchen. She was a beloved member of her community, who touched lives and hearts every day.

No one deserves to suffer the kind of pain she did, but we admit: we really wanted justice for Rozella Goldman. She may not have been here to see it, but John Felder and Steve Welch kept fighting on her behalf. They did not back down, and were able to deliver a medical malpractice verdict of $1.1 million to Peggy Goldman, her daughter.

At McGowan, Hood & Felder, LLC, this persistence and dedication to justice is what defines us. Our medical malpractice attorneys in South Carolina and North Carolina have obtained millions of dollars on behalf of our clients, because we believe in justice for the injured. By holding Dr. Robirds, Greenwood Internal Medicine, LLC, and Self Regional Medical Center accountable for the role they played in Rozella’s continued pain and injuries, we hope to ensure that other patients will not need to suffer in the way she did.

To learn more about our services, or to speak with an experienced South Carolina medical malpractice lawyer, please call 803-327-7800, or fill out our contact form.