Up until now, the hundreds of thousands of victims exposed to the carcinogens in the water at Camp Lejeune had little recourse for their injuries. On August 10, 2022, the President signed the PACT Act; contained within that bill is The Camp Lejeune Justice Act of 2022.

The Camp Lejeune Justice Act will allow veterans and anyone exposed (including those in utero) to water contamination for at least 30 days between August 1, 1953 and December 31, 1987 to file a claim in the U.S. District Court for the Eastern District of Northern Carolina. Passage of this legislation will eliminate a procedural bar in North Carolina that currently prevents victims from seeking legal claims. 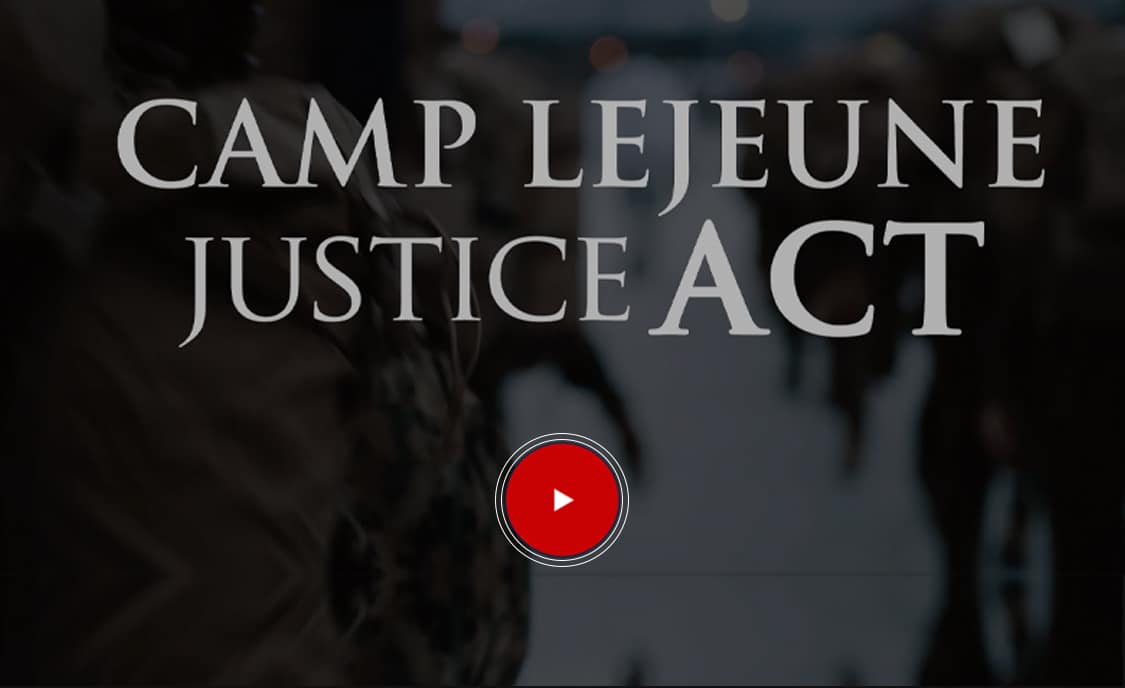 What is the Camp Lejeune Justice Act?

The Act promises to right the wrongs our veterans and their families have suffered for decades, and the physical toll the water has taken on their bodies. It reads as follows:

To establish a cause of action for those harmed by exposure to water at Camp Lejeune, North Carolina, and for other purposes.

Be it enacted by the Senate and House of Representatives of the United States of America in Congress assembled,

This Act may be cited as the "Camp Lejeune Justice Act of 2022".

SEC. 2. FEDERAL CAUSE OF ACTION RELATING TO WATER AT CAMP LEJEUNE, NORTH CAROLINA.

(a) In General.-An individual, including a veteran (as defined in section 101 of title 38, United States Code), or the legal representative of such an individual, who resided, worked, or was otherwise exposed (including in utero exposure) for not less than 30 days during the period beginning on August 1, 1953, and ending on December 31, 1987, to water at Camp Lejeune, North Carolina, that was supplied by, or on behalf of, the United States may bring an action in the United States District Court for the Eastern District of North Carolina to obtain appropriate relief for harm that was caused by exposure to the water at Camp Lejeune.

(b) Burdens And Standard Of Proof.-

(1) IN GENERAL.-The burden of proof shall be on the party filing the action to show one or more relationships between the water at Camp Lejeune and the harm.

(2) STANDARDS.-To meet the burden of proof described in paragraph (1), a party shall produce evidence showing that the relationship between exposure to the water at Camp Lejeune and the harm is-

(A) sufficient to conclude that a causal relationship exists; or

(B) sufficient to conclude that a causal relationship is at least as likely as not.

(c) Exclusive Jurisdiction And Venue.-The United States District Court for the Eastern District of North Carolina shall have exclusive jurisdiction over any action filed under subsection (a), and shall be the exclusive venue for such an action. Nothing in this subsection shall impair the right of any party to a trial by jury.

(1) IN GENERAL.-An individual, or legal representative of an individual, who brings an action under this section for a harm described in subsection (a), including a latent disease, may not thereafter bring a tort action against the United States for such harm pursuant to any other law.

(i) any program under the laws administered by the Secretary of Veterans Affairs;

(B) in connection with health care or a disability relating to exposure to the water at Camp Lejeune.

(e) Immunity Limitation.-The United States may not assert any claim to immunity in an action under this section that would otherwise be available under section 2680(a) of title 28, United States Code.

(f) No Punitive Damages.-Punitive damages may not be awarded in any action under this section.

(g) Disposition By Federal Agency Required.-An individual may not bring an action under this section before complying with section 2675 of title 28, United States Code.

(h) Exception For Combatant Activities.-This section does not apply to any claim or action arising out of the combatant activities of the Armed Forces.

(i) Applicability; Period For Filing.-

(1) APPLICABILITY.-This section shall apply only to a claim arising before the date of enactment of this Act.

(2) STATUTE OF LIMITATIONS.-A claim in an action under this section may not be commenced after the later of-

(A) the date that is 2 years after the date of enactment of this Act; or

(B) the date that is 180 days after the date on which the claim is denied under section 2675 of title 28, United States Code.

(3) INAPPLICABILITY OF OTHER LIMITATIONS.-Any applicable statute of repose or statute of limitations, other than under paragraph (2), shall not apply to a claim under this section.

This legislation also sets aside funds for claimants, in an effort to ensure all victims secure proper compensation for the harmful conditions they have developed.

We serve veterans and their families throughout South Carolina and the surrounding areas.

You fought for your country - let us fight for you.